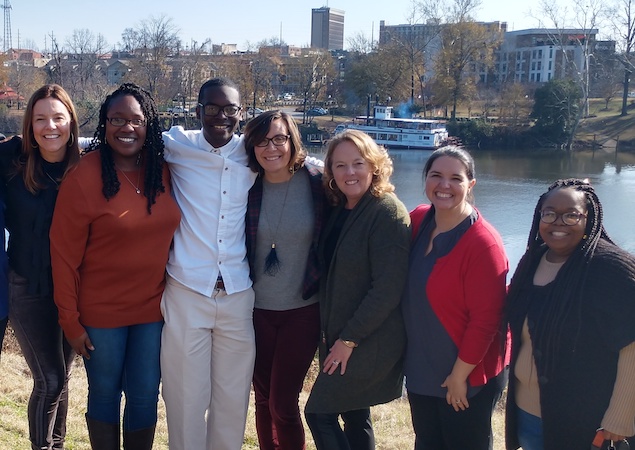 Timothy Skipper, who recently earned his degree in creative media at the University of Alabama, wrote and directed a short film about a mother’s love and guidance. The topic isn’t all that unusual, unless you consider the fact that Timothy grew up in an abusive home and was placed with a relative after his mother lost custody of him and his siblings.

“My film is about learning strength through resiliency and how important a mother is in a child’s life,” he said of the class project. “It’s very personal to me.”

Timothy, a Knabe Scholar who lived in Embrace Alabama Kids’ higher education home in Tuscaloosa for four years, didn’t have the best role model in his own mother, but he got plenty of love, guidance and nurturing from a group of women he calls “Team Mom.” This special group includes his grandmother, his high school librarian, and several staff members of Embrace Alabama Kids and the University of Alabama.

“I’ve had these women come into my life to show me what the love of a mother is like,” said Timothy, the first in his family to attend college and only the second to graduate from high school. “For the most part, my film was written from my experiences.”

The film, “The Rose That Grew from the Concrete,” premiered in February at the Black Warrior Film Festival, an annual competitive showcase of student films at Alabama. It received the “Audience Choice Award,” voted on by festival-goers.

“In my acceptance speech, I thanked all those who have supported me on this journey, especially the incredible women who have served as mother figures in my life,” he said. “I wouldn’t be where I am without them, and this film wouldn’t have been possible. It’s very affirming that people loved it. I’m pursuing something I’m passionate about and I’m good at, and I have the support of so many wonderful people.”

Timothy, who grew up in poverty, remembers periods of time with no electricity and very little food. His mother drank and was often angry and abusive. When he was 11, he was placed in kinship care with his grandmother.

After learning about Embrace Alabama Kids’ Knabe Scholarship, which provides full tuition, room and board to students in foster care or other alternative living situations, Timothy was hesitant to apply. “I didn’t believe in myself,” he said, adding that his school librarian convinced him to fill out the paperwork.

“That’s one of the best decisions I’ve ever made,” he said. “Embrace Alabama Kids provided me with a home, a family, stability, an education, and lifelong relationships. It means everything to me.”

You can view Timothy’s film, “The Rose That Grew from the Concrete” by clicking here.